My company’s official OS is Windows 10. GNU/Linux is not allowed, not even Ubuntu or Red Hat. PAINFUL.

But lately, not so much, since there is Windows Subsystem for Linux.

Of course, I’m not going to want to use Ubuntu, I want the distribution, Arch Linux. 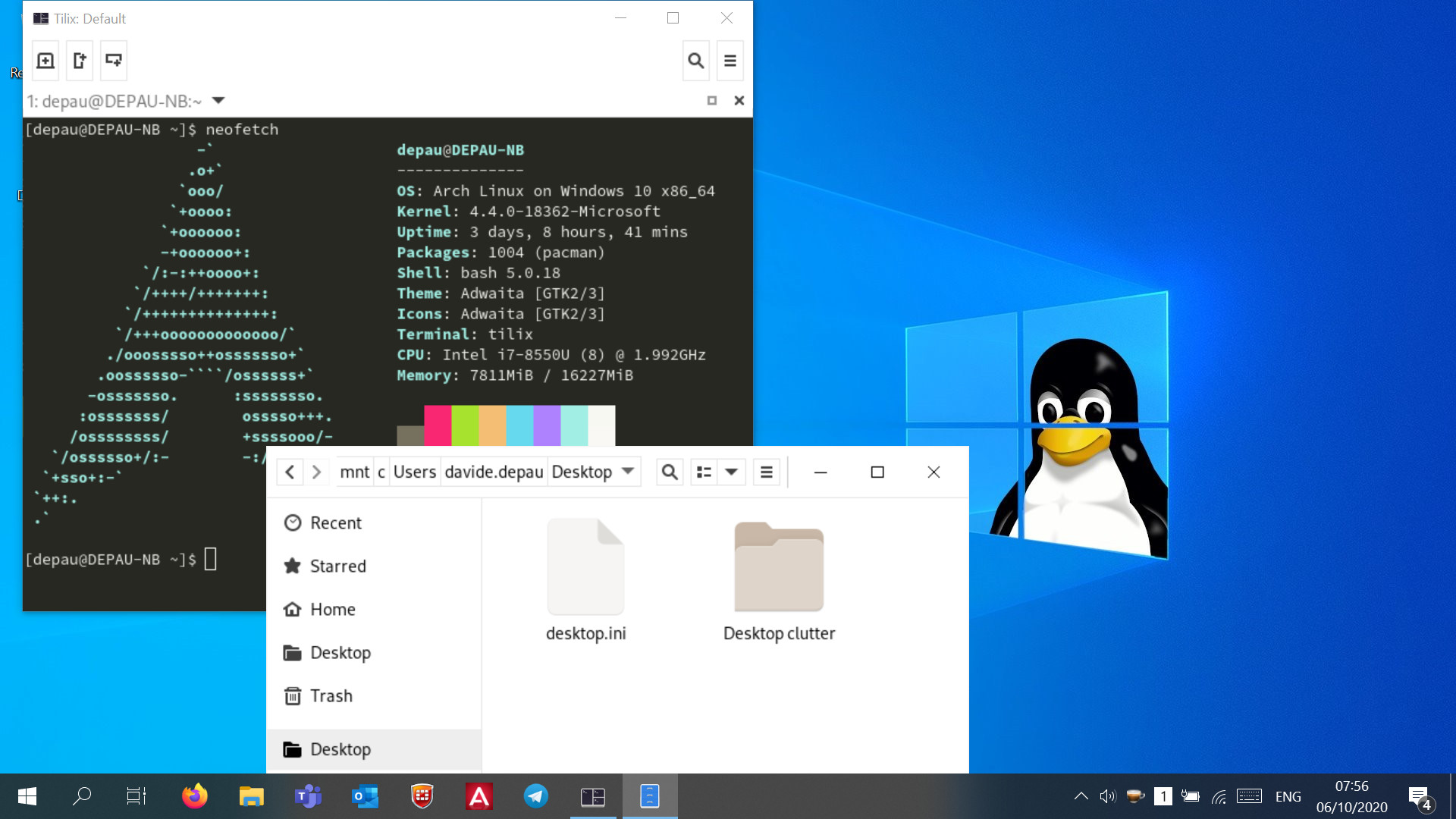 The only way to install it seems following this guide, but even though giving a quick look at the code everything seems rather okay, there’s a magic prebuilt rootfs (and no generation scripts) and I don’t really want to inspect its contents thoroughly to see if there’s anything malicious.

So, I tried to find a way to install it manually from a rootfs downloaded from archlinux.org.

Update 2021-05-01: I was eventually forced to upgrade to WSL2, with a few additional steps everything still works fine.

See the WSL2 section at the end.

So, on the native Arch machine:

Copy the new rootfs to the Windows machine.

Pick a suitable location for your WSL installation, such as \Users\%username%\WSL\ArchLinux. Picking a handy location makes it easy to copy files from WSL to somewhere else.

Note: apparently, you can only copy files from WSL and not to. Either they won’t show up in WSL at all, giving out ‘Input/output error’ on access, or it will crash Windows.

Then run in the command prompt:

It looks like paths with spaces won’t work with this tool on the command line, so make sure you cd into the path and use relative paths from there if your path has spaces.

Anyway, that’s about it. You can already run wsl or bash with no arguments to get into your WSL shell.

There’s a few catches, however, so go on.

The system is almost ready, except… you can’t make any package.

That’s because unless you’re running WSL 2 which runs an actual Linux kernel, Microsoft hasn’t implemented Unix SYSV IPC, which is used by fakeroot.

A workaround is to use fakeroot-tcp from AUR which uses TCP/IP sockets instead of Unix IPC, the problem is that in order to make it you need fakeroot…

The easiest solution is to build the package on a real Arch machine, then send it over and install it. The a-bit-less-easy solution is to make the package (it will fail). Then you overwrite libfakeroot.so in /usr/lib with the one you just built (in src/fakeroot-tcp), run makepkg -R and it should work fine this time.

I use vcxsrv. However, setting up an X server isn’t enough at times.

Over time I developed this set of scripts that will fix that for you, creating a session environment file that you will have to make sure is always loaded so programs will run properly:

This setup works on WSL2 as well, but a few more steps are required.

First of all you have to add a Windows Defender Firewall rule to allow WSL to access Vcxsrv, as described here.

Then, instead of enabling the 40_xorg_setup wsl-startup script you will have to enable 40_xorg_setup_wsl2, which will set the correct DISPLAY variable that points to the main Windows network.

If you’re in my same situation and you’re using Arch on WSL at work just because you must use Windows, it may be possible you’re also using an SSH client called SecureCRT.

If you are, you may want to check out my script shcrt. I’m planning to rewrite it in Python using urwid for a better (and faster) experience, but I haven’t started yet.

Let me know if you found this useful. Also let me know any suggestions:

Update: I don’t have to use Windows daily anymore. Don’t send me any emails :) If you have any suggestions that could be useful to other readers, be sure to add them to the comments below.