EtchDroid is no longer maintained

It was fun tho.

That’s quite a while ago.

Since then the app has become quite popular, way more popular than I could have ever expected.

313 stars on GitHub may not sound like a lot if you’re used to seeing machine learning and blockchain GitHub projects, but it is quite a lot for me.

As if the Google Play listing didn’t have the answer in fucking CAPS LOCK.

The reason is that your life sucks and that it sucks being you. You should stop being you, maybe that helps. 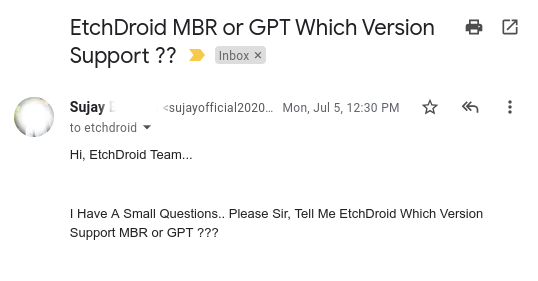 Me, myself and I think that it might support the RTFM partition layout.

Lmao. It’s like crash but in French, craché. Crash but 💅. I love it. 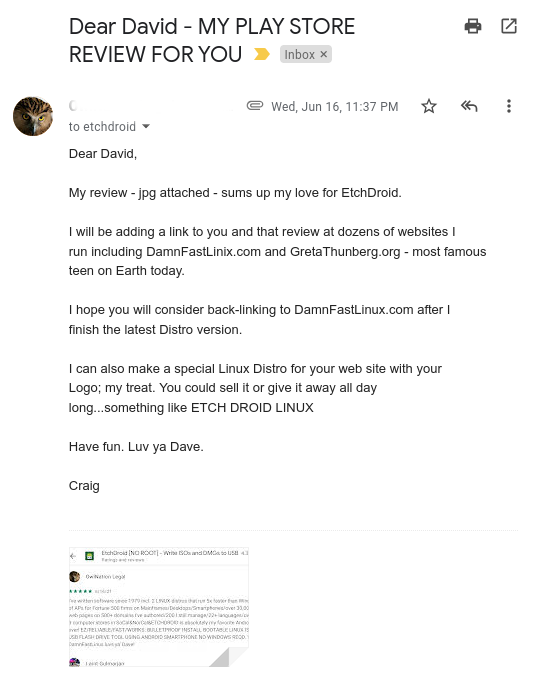 No, I was gonna go for a cryptocurrency, how about EtchDroidCoin? You mine it by flashing Windows ISOs, the block is won when it boots.

I guess you could use an asteroid for that, I don’t think it will work.
I appreciate the creativity of this guy, though. I like the way you think, James.

Has anyone heard of this WIMDOWMS OS? According to this guy it’s cool.

This one is my favorite BY FAR.

The thing is: I couldn’t care less about you, your USB drive, your computer, your Windows install. I don’t give a shit.

You guys know who I wrote EtchDroid for? For myself, that’s who, for my own fucking self! And you know what?

Sometimes it crashes, sometimes it doesn’t, usually it does its job.
And it’s perfect for me.

I used to, though

It’s not like it’s always been like that, some time ago I used to care. I used to reply to all useless GitHub issues, to actually get after them, to try to get new features implemented, to try to do some planning.

Eventually I realized my time is worth much more than that, and you guys can just fuck off, I am so tired of adding message boxes explaining stupid shit cause your ugly faces look like the following GIF:

It always puts a smile on my face when someone emails me that EtchDroid saved their day when in the middle of nowhere they managed to make their laptop boot.

That makes me happy.

I’ve got many good reviews on Google Play, and quite a few messages on Patreon and PayPal.
Thanks people.

Speaking of payment methods, yeah, I probably made something like 300 € in total. Which doesn’t even cover half of my monthly rent bill, and I received that money over the course of these 3 years.

I am very, very thankful to all the people who supported me, financially or with nice words over these years. However, that’s not enough.
You guys are amazing, but nice words don’t buy me food. Money does, but if I were counting on donations and patrons for that I’d be dead by now.

I’d like to say a few words about the translators. I haven’t received many code contributions, but I have received quite a few translations. That’s nice, thank you!

Jokes aside, I learned a lot from this app. When I started I barely knew Java and Kotlin, let alone Android programming.

Android is a very weird beast. I can’t think of other words better than “weird” to describe it, it has lots of weirdness, you either love it or hate it. I go for the first one, I really like the architecture, though it’s not an easy one to get started on.

Some of you may probably know me from POuL, Milan’s Technical University GNU/Linux user group. EtchDroid is what got me started with Android and I eventually ended up volunteering some classes about it.

Learning about how the most popular operating systems are installed and boot was cool. I suggest you search the Internet for that, you may find some very interesting reads :)

Last but not least, I also learned a lot on how USB drives work on a lower level, Working with libaums and with its author, Magnus, has always been a pleasure. I’m very happy to be a contributor to that project.

I guess it’s pretty clear by now that I don’t intend to maintain this app any longer, so here’s what you can expect from me:

That’s it, I hope you had fun reading my Darwin Award screenshot selection. If you’re the author of one of the amazing handpicked emails, I have something to tell you: FUCK YOU.