Why I use Arch, Wayland/SwayWM and why I don't sometimes

I wrote this post to share my opinions on GNU/Linux distributions, my setup, how I use it, how I got there and what I think is still wrong. I hope somebody may find it interesting or useful.

First of all, a very short distro-hopping history:

How I started with GNU/Linux

(skip this if you’re interested in my current setup/opinions)

I used to use my brother’s old desktop back when I was little. I ran Windows XP, not enough RAM to run Windows Vista though it was already out at the time.

Eventually some family friend gave me a bunch of old desktops the company he worked for had replaced, so I upgraded to Windows 7 as soon as it was released in 2009. I never really used Windows Vista.

I was aware of GNU/Linux: in fact I used to read this magazine on computery stuffs, one of those that came with DVDs with software to try. It was mostly Windows-centric, though sometimes it would talk about Ubuntu and its derivatives.

When it did talk about Ubuntu, it usually also came with an ISO of the Ubuntu derivative in question in the DVD. So I tried Ubuntu 6.06, then some later Kubuntu version, probably 8.04.

I was amazed, I really liked it, especially Ubuntu with GNOME 2. Not really KDE cause it’s bloated AF and it would lag on that thing.

Then… I eventually switched back to Windows. For a stupidly simple reason: Internet connection. We did have 7mbit ADSL, but my room was too far away from the router, in order to connect to the Internet I would have to move the router closer, make ridicolous USB extension cables for the Wi-Fi dongle. I even built a cantenna. Then I’d have to run apt-get update, and hope the link would stay up long enough for it to download the packages.

With Windows it was much easier because I could simply not update it (security 👌💯) and if I needed stuff from the internet, I could just use my brother’s computer or the library’s and use a USB drive to copy it to my computer.

In 2010 though, when I started high school, I got a gift: a laptop. Needless to say it’s much easier to move it close to the router. I initially used it with Windows 7, but after not so long I installed Ubuntu on it, and eventually stopped using Windows completely within a few months.

What made me do the full switch is that I realized that on GNU/Linux I could actually make the computer do whatever I wanted. I started learning shell scripting and Python — self taught.

While I’ve never really done any distro-hopping, I did a lot of desktop hopping.

I started with GNOME 2 on Ubuntu 10.10 Maverick Meerkat. Then Ubuntu switched to Unity. I did like it but it was way too unstable. So I ran away and switched to KDE 4, which was quite stable at the time. When Unity got more stable, I switched to it until I stopped using Ubuntu. I also tried XFCE, i3wm, Enlightenment, LXDE, GNOME Shell, but I every time I eventually switched back to Unity.

I did try Arch Linux, but building packages from the AUR was painful with that cheap laptop, using prebuilt packages from PPAs was much more convenient.

I switched to Arch in 2016 when I bought my new laptop (ThinkPad X1 Yoga, 1st gen). Building packages with a faster computer doesn’t take too long, so why not? I started with GNOME as it was the environment I was most familiar with, and I kept it until last year.

Why I quit Ubuntu

When I started using Arch, I realized how much Ubuntu was getting in my way. Ubuntu has a lot of tiny patches and customizations which, I must say, are definitely not bad. For example:

and there are more things I like, I just can’t think of all of them right now.

WHY IS MAKING A DEBIAN PACKAGE SO HARD? It’s all like hey I heard you like macros, I put macros in your macros so you can script while you script.

It’s a nightmare, there are tons of macros for every existing build system, I’m yet to find a package that actually runs cmake (or whatever is needed) without involving a macro that does the same thing plus who knows what else. There’s something like 20 different build tools that build a package in a slightly different manner. My toilet paper has better instruction than any of those tools, and no page on their wikis can apparently agree on which one is the right one to use (at least last time I checked).

Also good luck finding a MOTU/Debian developer that will maintain your package, they’ll stare at you sitting on top of a pile of paper on which all the macros are printed (therefore very tall), and tell youto read the fucking documentation (well they say “the code is the documentation”, right?).

Then each one of them will tell you all the extra requirements you must meet for having them sign your package and upload it into the repos,which hopefully doesn’t involve sucking their dick.

I used to use checkinstall whenever I could but I would find myself running sudo pip/make install way more often than I wanted to.

Also apt/dpkg is slow as hell, for whatever reason 🤷‍♂️

Why I use Arch Linux

On Arch, everything is easier. Well not easy as in my grandma could do it, maybe sane is a better way to describe it.

Everyone probably knows the Arch Wiki is the best fucking thing since sliced bread; the Gentoo Wiki is the second best thing.

If you have a little of knowledge, you can do whatever you want. If you don’t, the Wiki is there, read every single sentence and the knowledge will permeate your body. Seriously. It’s concise (unless I’m the author of that particular page), not repetitive, clear.

You may say Arch Linux has a reputation of breaking suddenly.
Does it break? YES.

How does it break though? Most of the times it’s the user’s fault, and it’s because they have done a partial upgrade. If there’s breaking changes in some library’s API/ABI, you will have to also update all the dependencies (or rebuild the packages that depend on that library, if you built them locally).

However, any experienced user will spot when this happens, and it’s an easy fix. Also, it’s in the Arch Wiki.

Maybe it will be a headache the first few times, then when it happens you’ll know it’s that and you’ll fix it without even thinking about it.

I’ve never ever reinstalled Arch Linux on my laptop. Not even once. I’ve been running and updating the same installation since when I switched to it. I was not very experienced back then. If I could do it you can too.

Once you’re over this, it’s just beautiful. If there’s a bug, you can ask upstream about it, no need to see if the bug was caused by a downstream patch.

You are in charge of deciding what goes into your system, no package is ever pushed down your throat (except systemd, if you’re one of those people).

Making packages for Arch is often easier than running sudo pip install, sudo make install. The package manager is on your side, not against you.

I’ve used X.org on my new computer for a few months, then switched to Wayland (still back when I used GNOME Shell). Yes, there are a few inconveniences, you can’t expect something that’s less than 10 years old replace a well established technology that’s been there from the beginning.

However, using X.org with a HiDPI display is simply a nightmare. It’s just not worth it, especially if you plan to use an external display.

Switching to Sway was very painful at first. I made the switch when I had enough of GNOME eating up RAM and crashing for no apparent reason.

I started with a friend’s configs and scripts, printed a keyboard shortcut cheatsheet I could look at whenever I couldn’t remember one, took a few days to customize all the configurations and set up a Git repo to sync them.

It does have many issues: for instance, Xwayland programs are blurred on HiDPI displays to begin with, so I made sure 99% of my programs were running in Wayland-native mode. However:

Other than that, once you get used to it, a tiling window manager is much more convenient than a regular floating one. If you’re used to have tons of terminal tabs open, you can now stop using the tabs and have the window manager do it for you. You can have tabs, or tiles,switch among them, tile them in another orientation, move them between displays fast.

And it works with the mouse too! That’s something that surprised me at first, I don’t know if that’s a thing on i3 but on Sway you can hold your mod key and drag a window around to visually tile it in a different location. Or drag it with the right mouse button to resize it. You can also have floating windows which work pretty much like on other WMs.

I often have five or more terminals open at the same time, and it’s very useful to be able to move them among workspaces, maybe have an eye on htop while on the terminal next to it I’m deploying a service, then move them around as needed or move one to a workspace on its own when more focus is desired.

As you may suspect, I am very satisfied with the way Arch Linux works.

However, there is two things that I hate about Arch, that I think Ubuntu does better.

The kernel is overwritten when you update it 😩

On Ubuntu you have a kernel metapackage, then a package with a different name for every kernel version. When there’s a new kernel in the repos the metapackage is updated to depend on the new kernel.

This way, when you update the kernel, you also get to keep the old one unless you remove it.

This has a few advantages:

On Arch, there’s a single kernel package that is updated in a rolling fashion. It is updated veeeery often, it’s not too uncommon to get a kernel update every day, sometimes twice a day.

The fact that it overwrites itself means that when you update it you have to reboot, otherwise you won’t be able to load new modules.

Forget that USB drive you plugged in, you gotta reboot now!

In fact, in Arch Linux’s infrastructure servers they themselves work around this by manually upgrading the kernel (source).

On my servers I run pretty much everything in Docker containers, so I don’t really care which distro I’m running, as long as it has htop, WireGuard, btrfs, ncdu. I use Arch on the machines I interact with the most often, Ubuntu on the other ones.

The second thing I don’t like is its absent multi-arch support.

It has its pros and its cons, so I’ll just do a bulleted list. 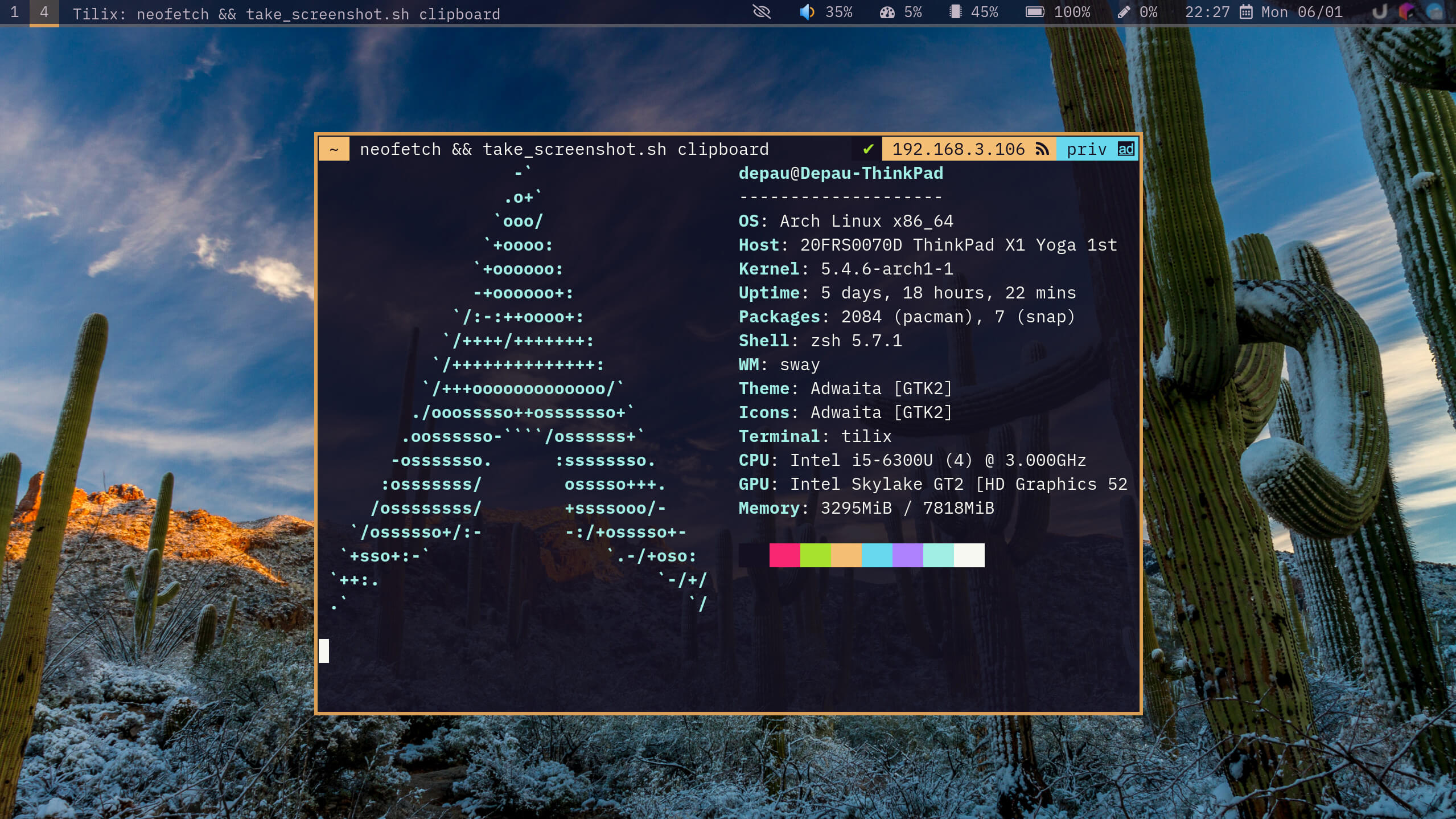